As with many security products, VMware Carbon Black Endpoint Standard (formerly known as CB Defense) allows for granular control of its behavior. The major ways Endpoint Standard accomplishes this is through the use of two types of rules: Permission Rules and Blocking & Isolation rules. These rule sets are configurable on a per-policy basis. Given that endpoints are assigned to policies this allows for your environment to be granularly managed. This whitepaper covers Blocking & Isolation Rules while another whitepaper covers Permission Rules.

This whitepaper is intended to relay practical knowledge that you can apply in your day-to-day usage of VMware Carbon Black Endpoint Standard.

Cyber security isn’t a “set it and forget it” kind of thing. Cyber security is a constant iterative process. With that in mind, it is imperative that Carbon Black Cloud administrators and analysts occasionally review rules for adequacy and effectiveness. With a changing customer environment and the changing threat landscape, rules of any type should not be considered static.

Standards Used in this Resource

Throughout this whitepaper different typeface standards will be utilized as follows:

Underlined text is intended to call out items an administrator will see verbatim within the Carbon Black Cloud console.

Policies are set to allow, deny, or terminate based upon an executable’s reputation from the table above. Surely an organization does not want to allow files with an “Unknown” reputation to perform actions such as code injection behavior. However, there may be software with legitimate purposes with a higher reputation that should be allowed to perform code injection, memory scraping, or other actions.

Depending upon policy settings, a customer may have all UNKNOWN files set to terminate or deny, which could cause a business impact if Google Chrome itself is marked with an UNKNOWN reputation.

Alternatively, the certificate used to sign Google Chrome could be added to the certificate allow list which achieves the same goal of elevating reputation due to known trust in the source of the executables.

File reputation levels higher in the table override those below it

IT Tools or Certificate allow-listing is a highly recommended method to alleviate blocks of known-good software. The reason for this is that should a piece of software be compromised VMware Carbon Black could designate those file hashes as SUSPECT_MALWARE or KNOWN_MALWARE. Because these reputations are higher in the list than ADAPTIVE_ the new reputations would override the ADAPTIVE_ reputation and prevent that malicious software from execution.

The same could be said for the TRUSTED_ status. A piece of software may be set by VMware Carbon Black to this status that has no legitimate business use for a customer. It could be given a COMPANY_ reputation by adding it to the Company Banned List. It would then be blocked due to COMPANY_ having a higher priority reputation than TRUSTED_.

Observe that the COMPANY_ status is at the top of the reputation table. (The IGNORE status is only used by VMware Carbon Black and is not customer usable.) A file with COMPANY_ reputation overrides every reputation below it, including KNOWN_MALWARE. It is for this reason that a Carbon Black Cloud administrator must be judicious when adding a hash to the allow-list.

Within policies a Carbon Black Cloud administrator can set what the Carbon Black Cloud sensor will do when it encounters a policy violation – terminate the process or simply deny operation. It is important to understand that setting a behavior to “Terminate Process” can have an impact on users. “Terminate Process” will do just that – ungraciously terminate an offending process. If a policy was set to Terminate process if winword.exe invoked a command interpreter a user could potentially lose work. Instead, by setting to Deny operation the command interpreter would be stopped from opening and the user’s work would not be lost.

If a hash added to the allow-list is later determined to be malicious and a KNOWN_MALWARE or SUSPECT_MALWARE reputation assigned by VMware Carbon Black, the file will still execute as its COMPANY_ reputation overrides those below.

Using the Test rule button to run a query against your organization’s most recent 30 days of data to see if this rule change would cause alerts and blocks. If there are no events, typically this means the rule is safe to implement. (e.g. If there were no ransomware events.) If the Test rule function shows potential blocks, an analyst will need to determine if blocks were legitimate or false positive. False positive blocks may need a Permission rule in order to p revent legitimate software from being blocked. (See associated white paper.)

It is advised to pilot major changes to rules within a new policy on a subset of endpoints to ensure that if there are unexpe cted blocks they will not affect large populations of users. The timeline for testing the new rule and deploying to the remaining endpoints is at the CB Cloud Administrator’s discretion.

It is advisable to move endpoints that are similar together from a less strict (Standard) policy to a more strict (Advanced) policy. The reason for this is that by moving to a more strict policy there is the potential to generate alerts and blocks. By limiting the alerts and blocks to similar systems, the tuning of policy Blocking & Isolation and Permissions rules is more straightforward.

Do not use “Application(s) at path” as a ban list

When malware is found in an environment, it can be tempting to implement a Blocking & Isolation rule as follows:

However, this will only terminate the process at this specific path. File path obfuscation is a very common defense evasion practice and the above rule would not cover c:\path\to\this\malware.exe, for instance. A wildcard rule (**\malware.exe) could account for this however file name obfuscation is also very common and the above malware.exe could very easily be renamed something completely random on every endpoint, rendering this kind of rule useless.

Instead, best practice is to ban this executable by file hash and ensure the appropriate rule is set in your policy:

This rule would block the banned file irrespective of where it is located on disk and what the file is named. Referring to our reputation table above, recall that a file placed on the company banned list only has one reputation with higher priority – the company allow list. ck Cloud Endpoint Standard – Blocking & Isolation Rules Best Practice

As stated earlier cyber security is not “set it and forget it”. Cyber security is a constant iterative process. It is recommended to follow Good, Better, Best for a policy enhancement strategy, and frequently check TAU-TIN (Threat Analysis Unit - Threat Intelligence Notifications) research.

The TAU TIN reports are integrated in the Carbon Black Cloud dashboard and built-in queries are provided for detecting new and emerging threats within the environment. Click full report to read the full analysis in the VMware Carbon Black User Exchange.

Each report includes a customer protection section, with recommended Blocking and Isolation rules to protect against that threat. Use the test rule functionality within policies and suggested queries in the Investigate tab to baseline the environment events and determine if the suggested rules are safe to apply or will it cause blocks on legitimate processes. As always, test new rules on a pilot policy prior to applying to all endpoints. 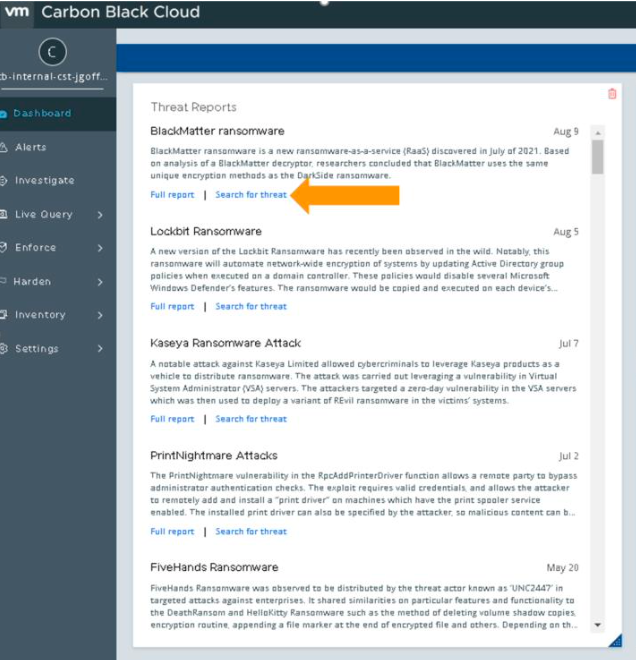 From the action bar MORE button.
Log in to enable this section.