On October 13, 2022 the NIST National Vulnerability Database published a CVE from Apache Software Foundation known as CVE-2022-42889. This is a critical vulnerability, with NIST giving it a score of 9.8.

In order to be vulnerable, the Java application code must use the StringSubstitutor interpolator of the library. This vulnerability then allows remote code execution (RCE) - an attacker can access the vulnerable host and execute arbitrary code. The vulnerability is easy to use and exploits are available, but unlike log4j the vulnerable API is not widely used, and thus there are far fewer servers affected than for the earlier log4j critical vulnerability.

How to tell if a VMware Carbon Black customer was affected

How to inspect your level of exposure

How to remediate the CVE or prevent exposure

As shown by the Carbon Black Container user interface, a fix is available in version 1.10 of the commons-text library.

Prioritize the patching of your container images with the Carbon Black Container dashboard. A good practice tip is to patch first critical vulnerabilities with fixes. 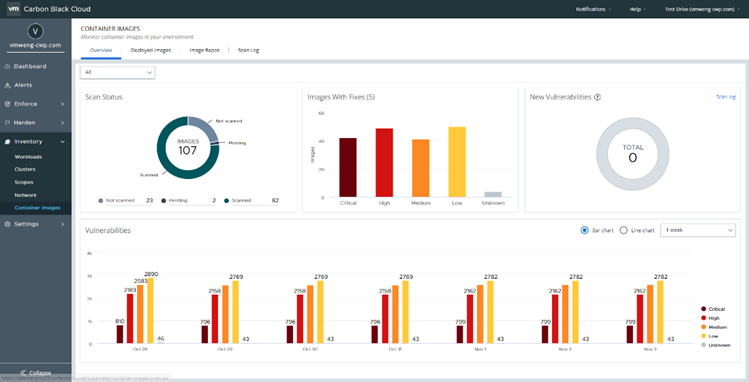 If it’s not already done, integrate a vulnerability scanner like cbctl in your CI/CD pipeline, no matter which one you are using: Jenkins, GitLab, Tanzu Application Platform.

To read more on VMware’s response to CVE-2022-42889, check out our knowledge base article.

The level of severity for CVS V3 score of this vulnerability is 9.8 - critical.

Impact
Apache Commons Text versions 1.5 to 1.9 are vulnerable. A fix is available in version 1.10.  Apache Commons Text is a Java library, the file name of the library for version 1.6 is commons-text-1.6.jar, and it can be included in a container image with the name “commons-text”.  The Java application code must use the StringSubstitutor interpolator of the library to be vulnerable.

About the Author and Contributors